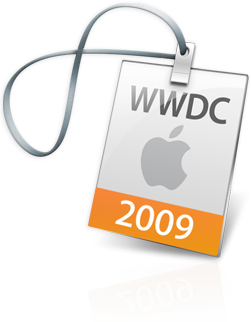 Man I wish I was in San Francisco right now ((For one thing I would be sleeping right now instead of being on my way to work on another boring Monday morning)) and as you may already know today ((We who live in the future must wait until tonight at 1900 CET to "watch" the keynote)) is the first day of the WWDC, also known as keynote-day. The rumor mill is running rampart with all kind of craziness - some make sense and some are just wishful thinking. I had planed writing a lengthy post of my WWDC predictions, but I believe Gruber of Daring Fireball has nailed it pretty much, so no need to repeat that. I don't think Steve will be appearing at this WWDC, that will probably first happen next month when Apple introduces the much rumored tablet-thingy. If, against all odds, Steve should appear it would be cool if would do it like Bill Amend envisioned on twitter: He'll call Phil during the introduction of the new iPhone - via the video chat feature. Since the keynote won't be streamed live, we'll have to make due with Twitter, IRC and live blogging. I plan to "watch" the keynote via ars technica and TUAW. - Web: http://arstechnica.com/apple/news/2009/06/apple-wwdc-keynote-liveblog-coverage.ars - Twitter: http://twitter.com/arsWWDC - IRC (liveblog): irc.arstechnica.com, #WWDC - IRC (chat): irc.arstechnica.com, #macintosh

It's going to be insanely great!