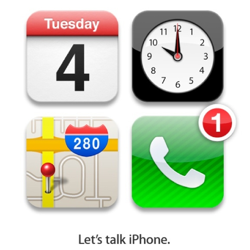 Today is the day we've all been waiting for.1 It's finally time for Apple to unveil the next iPhone and the next version of iOS.

No stream have been announced yet, and they are probably not going to do one as they really don't need to.

I personally hope this rumor is true, although I don't think so - too many different models that aren't all that different.

I do think the iOS part is going to be huge though. Normally Apple gives us developers a new iOS beta about each fortnight, and now new beta have been released since August 31st. To me this indicates that there is some really exciting new features2 that Apple didn't want to leak until todays presentation.

iCloud3 is probably also going get a lot of coverage today and will probably go live today or sometime before the end of October.

As always there is going to be a plethora of live blogging going on, and I will be using these sources4 to get my fix:

It's going to be insanely great! - And I will of course be playing keynote bingo with this cool little html5 app5.